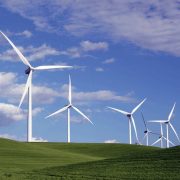 The path to 100% is clear. Mayflower groups have met with four Minnesota state senators to demand an increase of the state’s renewable energy standard from 25% by 2025 to 50% by 2030. Mary Keepers, Grant Thrall, Brian Buxton, and Jack Kattner have led groups of Mayflower, Shir Tikvah, and other faith community members (about 18 all together) in recruiting the senators’ support and advice on achieving our goals.

The benefits of clean energy include new businesses, new well-paying jobs, better air quality, and less expensive energy. These are realizable, bipartisan goals that all of us can rally behind.

Many team members felt trepidation going in to the meeting because they hadn’t met with their senators on business before. Everyone reported that the meetings went well, and all teams received commitments of support from the legislators. Way to go, teams! It appears the senate is not likely to enact the raised standard this legislative session, but we have created a movement and relationships that will bear fruit in the near future. We persist!

These efforts have pushed the Minnesota Conference Creation Justice Team to submit a 50% RES resolution to the 2018 Annual Meeting to further expand the movement.